[Maidian.com] During the 11-year holiday, the number of domestic tourist receptions and tourism revenues reached a record high. Railway data shows that passengers in Shanghai, Beijing, Nanjing, Wuhan, Guangzhou and other places...

[Maidian.com] During the 11-year holiday, the number of domestic tourist receptions and tourism revenues reached a record high. According to data from the railway, passenger traffic in Shanghai, Beijing, Nanjing, Wuhan, and Guangzhou is comparable to that of the Spring Festival. In terms of travel trends, the proportion of self-guided tours and self-driving tours has increased. Domestic well-known travel website, Tongcheng.com's travel booking data from October 1st to 7th shows that 73% of tourists chose free or self-driving tour during the National Day this year, and the proportion of group tour decreased by nearly 3 percentage points. The routes for tourists to travel are mainly short-term and short-term. In the choice of tourism theme, eco-tourism, natural scenery and cultural tourism are the three popular tourism themes. In addition, picking tours and farmhouses are also favored by urban tourists. Tongcheng.com's travel booking data shows that the top ten popular tourist cities during the National Day are Shanghai, Beijing, Hangzhou, Xi'an, Xiamen, Qingdao, Suzhou, Nanjing, Wuhan and Chengdu.

The tourism market is fully developed, with Shanghai, Beijing and Hangzhou ranking among the top three.

According to the tourism information Report issued by the National Holiday Office, 119 scenic spots monitored by the National Day of the 11th holiday this year received a total of 22,364,300 tourists, a year-on-year increase of 15.91%. Among them, the high willingness of citizens to travel and the recovery of the tourism market after the economic crisis are the main reasons, and the opening of several high-speed rail lines has greatly facilitated the citizens' travel and shortened the transportation time in the tourism process.

According to the data monitored by Tongcheng.com, the number of tourists on October 2, 3, 4 and 5 is relatively high. At the two ends of the holiday, the number of visitors on the 1st, 6th and 7th is relatively small. In combination with the product reservation data of Tongcheng.com, airfare, vacation and attraction tickets, during the 11th holiday period, the top ten tourist cities were Shanghai, Beijing, Hangzhou, Xi'an, Xiamen, Qingdao, Suzhou, Nanjing, Wuhan and Chengdu. As a popular destination for the 11th holiday in the past year, Hainan has not been listed in the list due to heavy rain this year.

About 1.5 million people entered the Shanghai World Expo during the 11th holiday

During the 11-day holiday, the total number of visitors to the Shanghai World Expo was 2,474,200, which was flat. Among them, the number of people entering the park on October 3, 4, and 5 was relatively high, which was in line with the trend of tourists during the 11-day holiday, but there was no extreme passenger flow of more than 500,000 in a single day. Another data shows that at around 10:00 on October 8, the total number of people entering the Shanghai World Expo exceeded 60 million. According to the previous law of â€œviewing the Boâ€, the final peak of the flow of people will be ushered in 20 to 60 days before the closing of the Expo. Therefore, in the next 20 days, the cumulative number of â€œView Boâ€ is expected to exceed 70 million. aims.

During the 11th holiday this year, outings have become a favorite way for many citizens to travel. Among them, picking tours and farmhouses, which are close to nature and green ecology, are the most popular. According to the Tongcheng.com attraction ticket reservation and vacation line reservation data, during the eleventh period, the tourist attractions and tourist routes mainly based on the picking of golden autumn fruits and vegetables were hot, and the individual picking tour theme spots were full. During the eleventh period, the picking tour mainly focused on the picking of seasonal fruits and vegetables such as oranges, apples, pears and grapes. The popular destinations for picking tours are mainly distributed in the main producing areas of various fruits and vegetables, such as Qixia in Shandong. Hangzhou and Ningbo are popular picking destinations in East China. In terms of farmhouses, Shanghai, Changsha, Beijing, Chongqing and Suzhou are the most popular.

1. GTO Database has no limitation on products and country searching.

2. GTO database will be available for more than thirty countries, details as the following table.

3. GTO database is easy for any report generating.

4. GTO database can be searching according to company name, product description, hs code and so on. 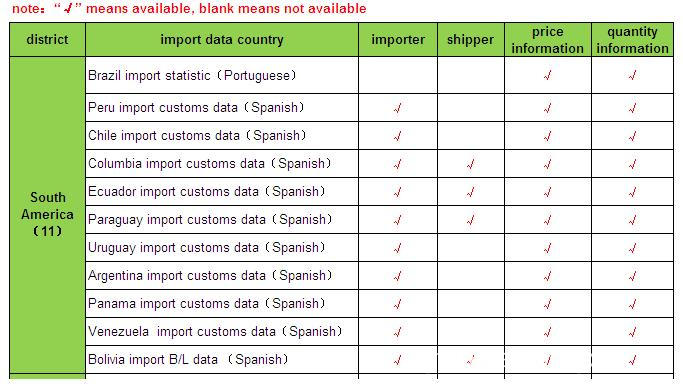